This sounds like an industrial ghost, or a haunted factory with monsters banging pipes and rattling chains and cans… Create everything from dungeon atmospheres to abandoned spaceships with this unusual and unpredictable instrument.

There are 11 samples of the wobbly tuned percussion instrument known as the Flexatone here. These noisemaker instruments are often heard in old cartoons and in horror films, but have been used in Latin, Funk and Classical music to a large extent as well.

The Flexatone is prominent on Funkadelic’s ‘Back In Our Minds’, and has been used on a wide variety of albums. (At one point, it even had a Halloween edition made, which we sadly didn’t have for the recording this instrument pack, but we’re determined to hunt one down eventually…)

Although the instrument cannot really be played to a specific pitch, it is possible, by playing up and down the keyboard, to raise and the lower the pitch about as accurately as it is with the physical Flexatone.

A ‘Metal Ghost Delay’ effect rack is included to enhance the spookiness, which gives a kind of empty spaceship or decayed factory type of sound.

Kaboodle Sound instrument and FX demos are made to show the sound of the instrument or effect. They are mostly made using generative and random techniques and try to avoid specific genres.

The 11 samples in this instrument are randomly shuffled when playing, with the start point of the sample changing randomly as well; this makes the instrument feel much more organic and unpredictable, and more like a real Flexatone. However, it is easier to control the pitch of this virtual instrument, and you can also change the amount of pitch and volume modulation (although you obviously can’t remove the modulation from the original sample).

The samples were all recorded in a cold, empty, echoey room for added atmosphere, rather than a typical studio environment. These samples were selected out of around 50, and edited to give only the best results; we recorded with the metal of the Flexatone warm as well as cold, and different amounts of vibration and intensity. The samples that weren’t spooky enough for this project may well end up in their own instrument in the future…

Note: This premium pack is also included in the Spooky Sounds Collection.

There are no reviews yet.

Be the first to review “Spooky Flexatone Rattle” Cancel reply 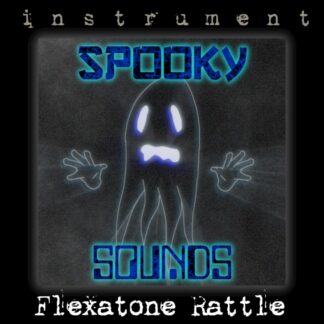 You're viewing: Spooky Flexatone Rattle £5.00
Add to basket
We use cookies to ensure that we give you the best experience on our website. If you continue to use this site we will assume that you are happy with it. CLICK 'NO' TO REFUSE 3rd Party COOKIES... (Anyone else hate these cookie pop-ups as much as we do? We wish it wasn't required...)OKNoPrivacy policy